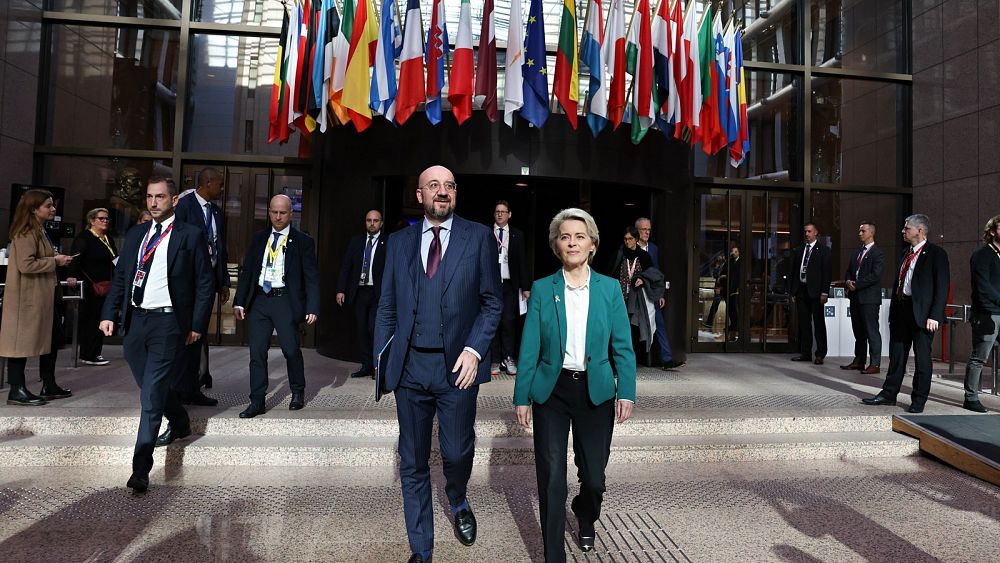 Continued support for Ukraine and the bloc’s strategic stance against China dominated discussions among EU leaders during the second day of a summit on Friday.

European Commission President Ursula von der Leyen has announced that the EU is preparing to provide Ukraine with up to €18 billion in financial assistance throughout 2023 to cover the budgetary needs of base of the war-torn country.

“It is very important for Ukraine to have a predictable and stable revenue stream,” von der Leyen said after a two-day meeting of EU leaders in Brussels.

The International Monetary Fund (IMF) has estimated that, for 2023, Ukraine will need 3-4 billion euros in foreign aid per month to keep its public services functioning in the context of the Russian invasion.

The money is expected to come from the EU, US, UK and other Western countries, as well as international financial institutions.

According to Ursula von der Leyen, the EU aims to contribute with 1.5 billion euros per month, for a total of 18 billion euros in 2023. The President of the Commission did not reveal more details and said said work on the future package was still in its early stages.

“We instructed finance ministers to develop the appropriate mechanism, but it was important to send this signal to Ukraine that we know very well how important this reliable revenue stream is,” von der Leyen told reporters. .

So far, the bloc has pledged to provide 9 billion euros to Ukraine in the form of exceptional loans to help the country support its 2022 budget. The money is raised by the Commission on international markets, then covered by guarantees using the common EU budget and national contributions.

But unlocking this macro-financial aid has been bogged down by talks among member states, some of whom argue the money should come in the form of grants rather than loans.

In a virtual address to EU leaders, President Zelenskyy criticized the delay of the remaining €6 billion.

“Thank you for the funds that have already been allocated, but a decision has not yet been made on the remaining 6 billion euros of this package, which are badly needed this year,” Zelenskky said on Thursday.

“And it is within your power to reach an agreement in principle on providing this assistance to our state today.”

Europe cannot be ‘naive’ to China

The other big topic of the day for European leaders was China.

Despite occupying just one line in the nine-page conclusions released after the summit, the discussion between the leaders lasted three hours and was described by French President Emmanuel Macron as “very intense”. .

“What emerged from these three hours of discussions is now unanimity on the need to have European strategic autonomy,” Macron told reporters.

“We need strategic autonomy and our policy, especially vis-à-vis China, cannot be dictated by anyone, any more than it can be part of a form of technological dependence on metals and lands. rare,” he added.

The behind-closed-doors exchange came just days after Xi Jinping secured an unprecedented third term in office and as concerns about China’s recent aggressive behavior or rhetoric toward Hong Kong and Taiwan mount.

For European leaders, it was also an opportunity to refine their common positions with a view to an EU-ASEAN summit in mid-December.

Charles Michel said that the discussions showed that “there is a very, very strong, very, very consensual, very, very convergent conviction that has been expressed by all 27 European leaders on the importance of really developing this strategic autonomy, this ability to be less dependent from a strategic point of view, to have more independence from a strategic point of view, but also to strengthen and diversify our partnerships with the rest of the world.”

“It is a debate which has shown our desire not to be naïve but also not to follow a logic of systematic confrontation”, added the President of the European Council.

“Europe has historically made a mistake”

The COVID-19 crisis and Russia’s illegal war in Ukraine have clearly exposed the bloc’s dependence on the two countries for its energy needs.

Before the war, the vast majority of Europe’s fossil fuel imports came from Russia, while China dominates international supply chains when it comes to mining and refining rare earth materials, including lithium.

Other problems with China for Europe include respect for human rights, lack of a level playing field – access to the Chinese market is restricted and highly dependent on the transfer of technology and know-how from the European – as well as blurred lines between business and the state.

There are also growing fears that Chinese tech giants including Huawei — which provides the 5G infrastructure — have close ties to the country’s intelligence services and on Chinese investment in European infrastructure.

This is particularly important as EU capitals wrestle with the question of how to ensure the protection of critical infrastructure following the alleged sabotage of the Nord Stream gas pipeline and the German rail network in recent weeks.

Like Michel, Macron also called Europe’s past strategy towards China “naive” and said that when it comes to critical infrastructure, “Europe has historically made a mistake.”

“During the financial crisis, we pushed several Member States in difficulty in terms of public finances to sell off infrastructure without a European buyer. Thus, on many of these critical infrastructures, it was Chinese players who came to buy.

The EU has strengthened its Critical Infrastructure Protection Directive, with member states encouraged to deploy stress tests as quickly as possible and the Commission calling for more coordination between countries as critical infrastructure increasingly crosses borders.

“It is in their interest that we are divided”

Some smaller member states have meanwhile called for more unity on China and to ensure geopolitical concerns prevail over trade issues as Germany’s Olaf Scholz prepares to visit Beijing on next month.

His Estonian counterpart Kaja Kallas said that “with China it’s the same as with Russia”.

“It’s also very important that we don’t have separate deals with China because that would mean we’re weaker as a union,” she said.

The second day of the Brussels European Council began after a very short night for leaders who agreed around 2 a.m. to ask the Commission to press ahead with concrete measures to curb the price of gas and electricity.